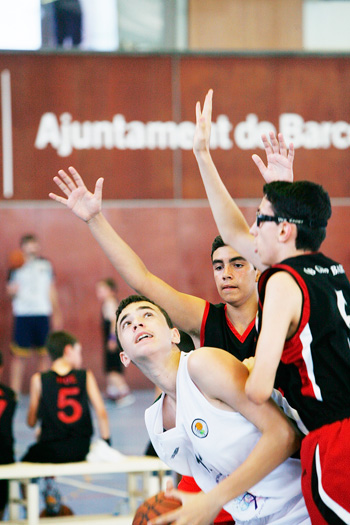 The 11ª BARCELONA BASKETBALL CUP 2022 edition will be developed under the Spanish Federation of basketball rules, with some modifications introduced by the Organization that will be explained as follows:

2.- Each game will be divided in 4 periods of 10 minutes each with non-stop play time, except for the last two minutes of the 4th period where the game time will be stopped. The clock will also be stopped  after every personal foul. After the first two periods there will be a 3 minute half time.If the game  ends in a tie, an extra-time of 3 minutes will be played with continuous play time. If the game is still tied it will continue until one of the teams scores a basket.

3.- For every period each team will have a time-out. It will be given under the official competition rules, after each basket conversion.

5.- Zone defending is forbidden(in the categories A, B, C, G and H). The first time it will be penalized with a warning, the second time,  with a technical foul to the coach and the third time with the loss of the game by 2-0. The referees criteria will be the only valid one.

6.- The no passivity rule will be applied (art. 33 of “Mini-basket official rules”), with the loss of the ball to the opponent. The referees criteria will be the only valid.

7.- Both teams have to  present themselves in  the game court 15 minutes before the game begins.  Any non justified delay will be penalized with the loss of the game by 2-0.

8.- If the teams uniform colours are similar it will be the visitor team who will change their uniform.

9.- The tournament organization has a proper Discipline committee, wich  will be the tournament´s disciplinary organ, their decisions will be taken on the spot and will not be overruled and can´t be appealed. The participating teams will be comprimised to accept the decisions taken by the Committee, with option to discuss them. All teams must choose one single person, who will represent them before the Organization. Only this person can clarify or resolve problems with the organization, other team member´s attempts won´t  be taken into consideration.

10.- The organization reserves the right to modify the games schedule, if needed, due to justified or unexpected reasons.

11.- The marker will be indicated on the rink, closing it without a team wins by more than 30 to 0

All these rules are aimed to guarantee a good evolution of the tournament, without any delays or interruptions.

NOTE! This site uses cookies and similar technologies. If you don't change your browser settings, you agree to it. Learn more